We are excited to announce the release of HashiCorp Vault 0.9. Vault is an infrastructure automation security product that provides secrets management, encryption as a service, and privileged access management.

The 0.9 release of Vault is focused on new functionality that improves Vault’s governance and data security capabilities across globally-distributed, multi-cloud environments.

New features in 0.9 include the following:

Vault 0.9 introduces a new means of managing access to secrets via the new Identity system. This system allows Vault to understand the identity of individual users and machines across their tokens, and manage them via groups. There are two fundamental components of the Identity system: entities and groups.

Identity Groups will serve as a major piece of Vault’s Privileged Access Management story going forward, and we will build on this feature with new enhancements and functionality in future releases of Vault and Vault Enterprise. Some more information follows; full Identity documentation is available here.

Entities are single, logical identities that represent users and applications across any tokens they have generated using auth backends, even multiple auth backends. For example, a user may have AWS credentials as well as LDAP or Active Directory credentials. These separate credentials (known as Aliases within Vault Identity) and all of the tokens generated by these credentials are all recognized as referring to the single user or application within various parts of Vault. Vault simplifies administration across multiple Identity Providers (IDP) by bridging them into a common identity.

Vault will automatically create an Entity if one does not exist for any client gaining access to a secret within Vault. Entities can have policies assigned to them that apply to all tokens associated with that entity. They can also be referenced in Sentinel policies, and custom metadata set on the entity can also be referenced within Sentinel policies. This can be used to do grouping of entities, but the Identity system also supports real groups.

Similarly to entities, groups can be used to assign policies and metadata. Groups can contain direct entity members, and can also contain other groups. This allows for major enhancements to automation by using Identity Groups to quickly and easily grant access to secrets and functionality within Vault. 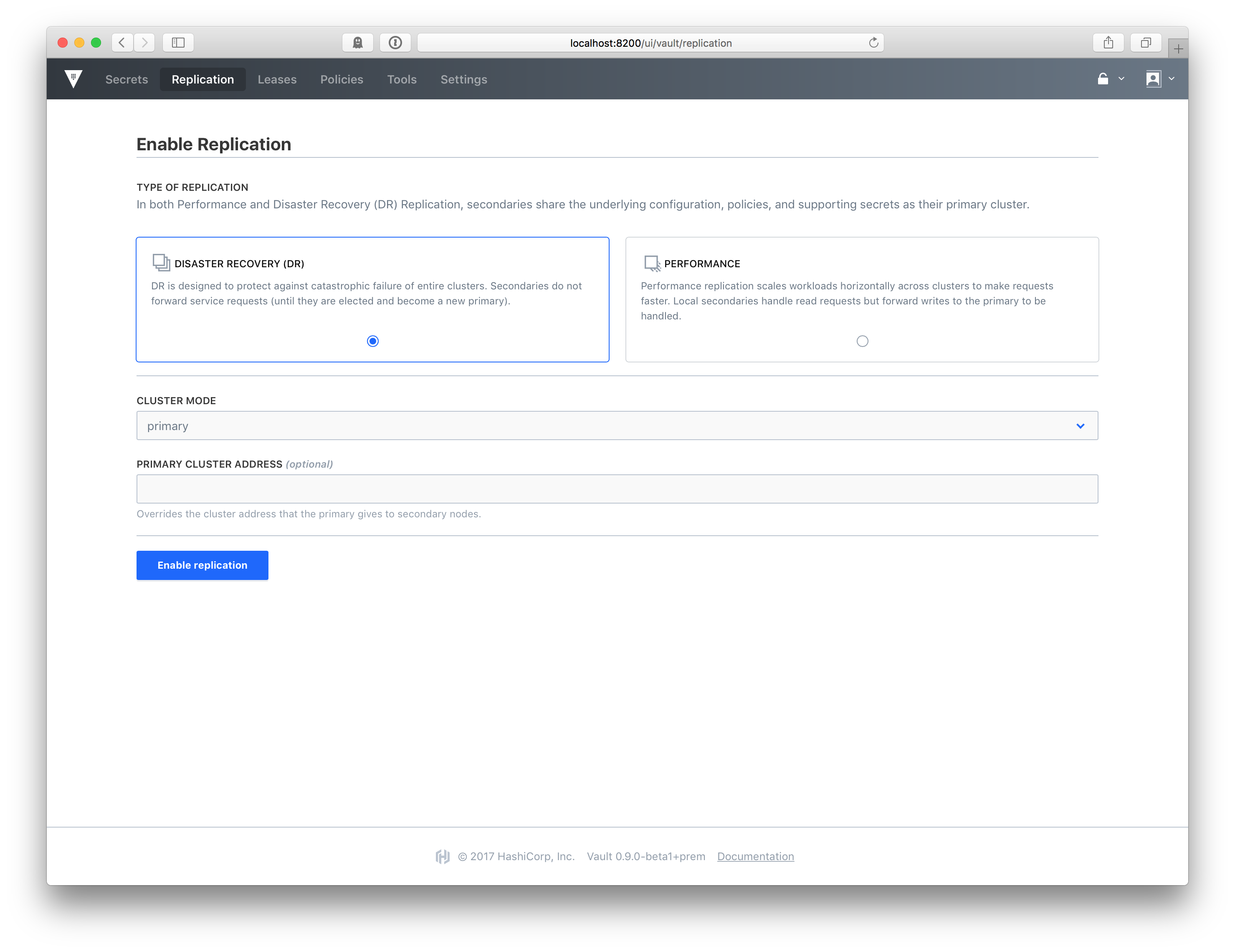 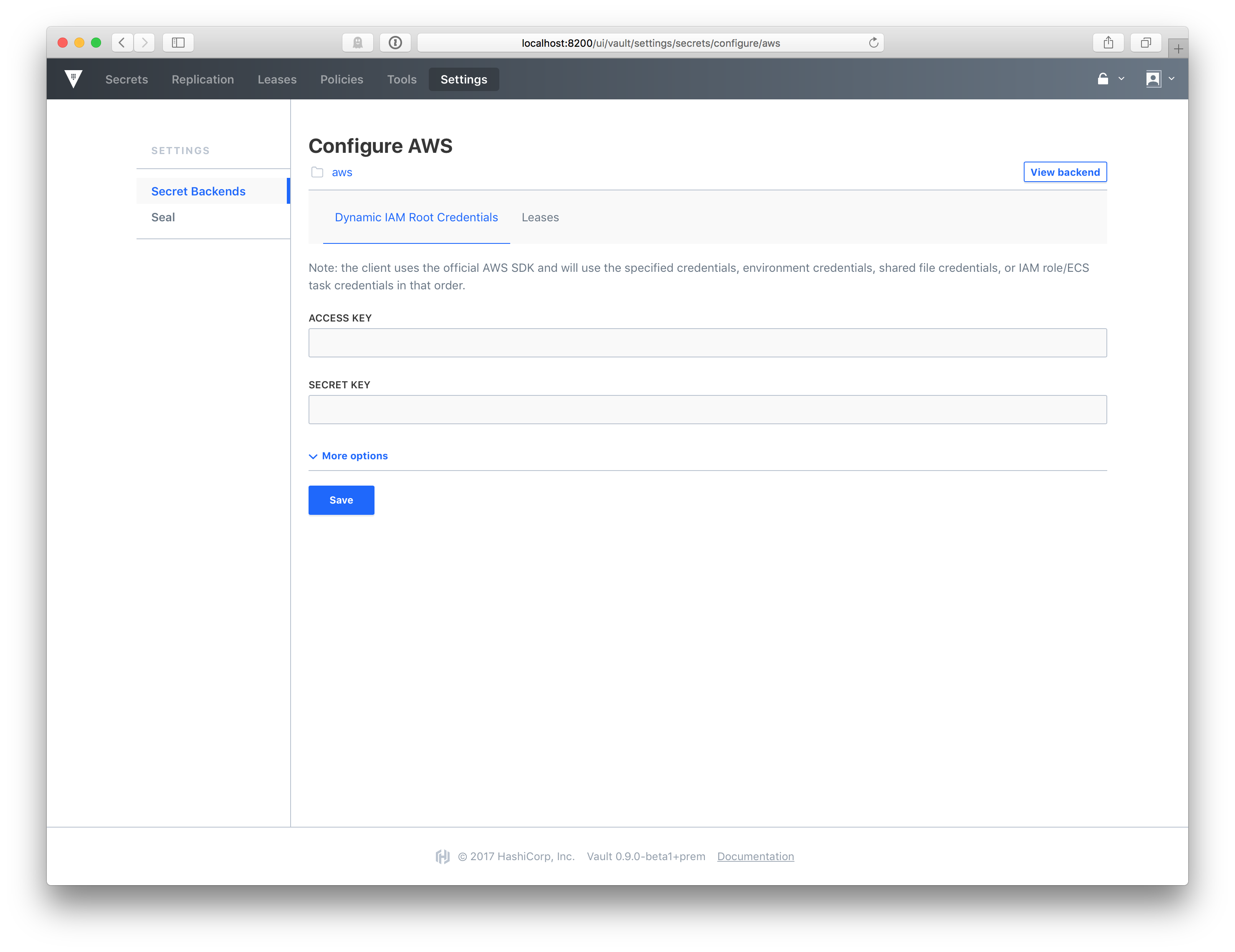 The new Vault UI also expands on the functionality seen in previous versions of Vault Enterprise. In Vault 0.9, users can also engage in common workflows for secrets management including configuring backends such as the AWS IAM secret backend completely within the GUI.

In Vault 0.9, Vault Enterprise supports Auto-Unsealing on AWS KMS and GCP Cloud KMS. We will continue to iterate on Cloud Auto-unseal in future releases with supporting cloud environments such as Microsoft Azure via Azure Key Vault.

Seal Wrap is new functionality within Vault Enterprise Premium that allows Vault to encode Critical Security Parameters (CSPs) with encryption derived from external modules. These external cryptographic modules are derived from sources that Vault can Auto-Unseal from, including AWS KMS and GCP Cloud KMS; as a result, seal wrapping is available whenever Auto-Unseal is enabled.

Seal Wrap allows operators to reinforce Vault’s encryption with specific cryptography necessary for government and regulatory compliance - in particular the US FIPS 140-2 standard.

Control Groups allow a given request within Vault to require authorization from one or more Identity group members acting as “gatekeepers”. This authorization requirement can be applied to nearly any Vault request, whether for generating dynamic secrets or changing Vault configuration. For example, a policy can be set to require any request for production Postgres credentials to be approved by members of the "DBA Admin" Identity group.

Control Groups are designed to help Vault Enterprise systems store data in conformance with regulations like the European Union GDPR or HIPAA that require multiple authorizers for accessing certain types of sensitive information.

Through RGPs and EGPs, operators can create and enforce powerful Sentinel policies for brokering access to secrets within Vault. For example, a policy could be created to require that Entities within a specific Identity group must connect via corporate internal IP addresses and pass through Multi-Factor Authentication when attempting to access secrets within Vault.

For more information on Sentinel’s integration within Vault, see:Sentinel with Vault documentation

There are many new features in Vault 0.9 that have been developed over the course of the 0.8.x releases. We have summarized a few of the larger features below, and as always consult the Changelog for full details.

As always, we recommend upgrading and testing this release in an isolated environment. If you experience any issues, please report them on the Vault GitHub issue trackeror post to the Vault mailing list.

For more information about HashiCorp Vault Enterprise, go to https://www.hashicorp.com/products/vault. Users can download the open source version of Vault at Vault downloads.

We hope you enjoy Vault 0.9