Chris Baker has been a senior software developer in academia, industry and government for over 20 years. Previously a scientist for the US Department of Energy, he developed software for the world's largest supercomputers and published research in leading international journals. He is currently a software engineer on the Nomad team at HashiCorp.

Renaud Gaubert has been working since 2017 at NVIDIA on making GPU applications easier to deploy and manage in data centers. He focuses on supporting GPU-accelerated machine learning frameworks in container orchestration systems such as Kubernetes, Docker swarm, and Nomad.

HashiCorp Nomad 0.9 introduces device plugins which support an extensible set of devices for scheduling and deploying workloads. A device plugin allows physical hardware devices to be detected, fingerprinted, and made available to the Nomad job scheduler. The 0.9 release includes a device plugin for NVIDIA GPUs. Some example use cases are:

Device plugins represent a new feature in Nomad 0.9. They allow the Nomad client to discover available hardware resources in addition to existing built-in resources such as CPU, memory, and disk. A device plugin detects devices and fingerprints their attributes. When scheduling a task using resources associated with a device plugin, the plugin also assists the Nomad client in making the allocated device available to the task.

During fingerprinting, a device plugin reports the number of detected devices, general information about each device (vendor, type, and model), and device-specific attributes (e.g., available memory, hardware features). The information returned by the plugin passes from the client to the server and is made available for use in scheduling jobs, using the device stanza in the task’s resource stanza, for example:

This stanza allows selection of custom devices. Users can indicate their requirements to varying degrees of specificity. For example, a user can specify nvidia/gpu to get any NVIDIA GPU, or they can specify the exact model they want, such as nvidia/gpu/1080ti. In addition to specifying some number of necessary devices, the device stanza supports both affinities and constraints on device resources. These allow specifying device preferences and/or constraints using any of the device attributes fingerprinted by the device plugin.

In keeping with Nomad’s goal of easy cluster deployment, registering these plugins does not require recompiling Nomad. It’s only necessary to place them on the client nodes alongside the Nomad binary.

The NVIDIA device plugin first scans the client node for suitable NVIDIA GPUs, then fingerprints their hardware and capabilities, including clock speeds, driver version, and memory size. The plugin ultimately reports discovered devices as NVIDIA resources for the node. For example, the following node status indicates a GPU device discovered by the NVIDIA device plugin, along with all of the fingerprinted attributes of that device:

The Nomad job specification’s resource stanza works with any detected and available devices. The following example shows a resource stanza that requests 2 NVIDIA GPUs. The label “nvidia/gpu” indicates a requirement for devices of type “gpu” with vendor “nvidia”. A constraint stanza indicates memory requirement using human-readable units while an affinity stanza indicates an optional preference for a device with model Tesla. The scheduler filters nodes that don’t have at least two devices matching the constraints and then ranks according to the satisfaction of any affinities. When the task is scheduled to a node, the scheduler marks the GPUs made available to the task as allocated and unavailable to other jobs for the lifetime of this task.

To run the demo yourself in AWS, you can provision Nomad infrastructure using this Terraform configuration and run the TensorRT example job.

Figure 1 shows how the libnvidia-container integrates with the Nomad client, specifically at the runc layer. We use a custom OCI prestart hook called nvidia-container-runtime-hook in order to enable GPU containers in Docker (more information about hooks can be found in the OCI runtime spec).

At container creation time, the prestart hook uses environment variables to check whether the container is GPU-enabled and uses the container runtime library to expose the NVIDIA GPUs to the container.

The use cases for running orchestration software with GPUs range from managing a GPU cluster for scientists to running Deep Learning models as production services. Let’s focus on the latter use case and how this maps into a smooth experience with Nomad.

The result of the many hours it takes to train a neural network is a model. The model describes the structure of your neural network (layers, weights, etc) and adheres to a specific format depending on the framework that you use. If you or your data science team have built, trained, tweaked and tuned a model, Nomad is a great choice for going to production.

Going to production with a Deep Learning model is far from simple, so let’s walk through the various concerns that exist:

You can address many of the concerns above through a combination of the orchestration software and the inference solution. For example, NVIDIA’s TensorRT Inference Server makes optimal use of the available GPUs to obtain the maximum possible performance, provides metrics to Prometheus, and takes care of handling incoming network requests via HTTPS and gRPC. We use the TensorRT Inference Server which allows us to benefit from the GPU’s ability to significantly speed up the compute time, as seen in Figure 2. 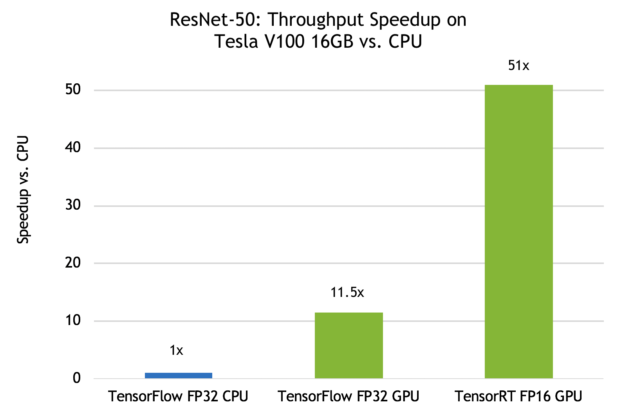 Now let’s look at the process of taking a known model (RESNET-50) and getting to a production setup that can serve thousands of requests. This uses the following steps:

You can download the TensorRT inference server container from the NVIDIA container registry.

It requires substantial setup, such as specifying the different ports used to communicate over HTTP, gRPC, or its metrics. It also requires specifying the number of devices to use. As a side note, the server can serve requests for multiple models in the same container on multiple GPUs.

This is a much better architecture than one server per model per GPU, allowing “sharing” of the compute power of the GPU to multiple models.

You can customize this configuration for your needs using this Nomad job file.

»Step 2. Feeding the model to the TensorRT inference server

The TensorRT inference server functions quite simply. When you start it, you tell it where to look for your models and it will try to load them according to the specification available here (supports many specifications).

In this example, we tell it to load a resnet-50 caffe2 model which comes with 4 files: the init network (that that initializes the parameters), the predict network (that runs the actual training), the config.pbtxt (which describes the layers), and finally the labels.txt which lists the labels (your model outputs a number which maps to a label).

The task specification below uses multiple instances of the Nomad artifact stanza to download the models to the container before it starts. The “image”, “command”, and “args” parameters define the location of the Docker image and the command to run.

You have multiple options for feeding the model when using the TensorRT Inference Server:

The below example is suitable for testing. When you go to production you might want to consider option (2) above, as it provides you with the most flexibility.

You can interact with the server using the following CLI command (more on setting up the client):

However, in order to confirm that our model is able to handle HTTP requests, we deploy a sample web application which allows us to upload an image and send it to the inference server. 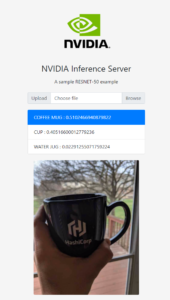 We’ll deploy the tensorrt-frontend container, which is a simple HTML upload form that invokes the above command line in python.

In the above example, the template section allows us to point the frontend to the server. When we deploy this Nomad job we can quickly get to the following screen. Please check out the full demo for more details.

Note that this blog post describes a deployment workflow and is not intended to showcase the best inference performance. The inference accuracy may be improved by pre-processing of the images.

The Nomad 0.9 device plugin feature builds on Nomad’s mission of running any application on any infrastructure. The NVIDIA GPU device plugin gives us the ability to exploit NVIDIA GPUs for those workloads that benefit from GPU acceleration, using the same cluster scheduler that runs our non-GPU workloads. To learn more about Nomad itself, please visit the README page or the Introduction to Nomad documentation.

Watch these highlighted talks from our 2021 HashiTalks community event. This recap features talks on HashiCorp Nomad and Consul.

Learn the equivalent terminologies, comparisons, and differentiations between HashiCorp Nomad and Kubernetes.

Levant is Now a HashiCorp-Supported Project