Tip: HashiCorp Learn now has a consistently updated tutorial on how to generate tokens for machines or apps by enabling the AppRole auth method. Visit this page for the most up-to-date steps and code samples. Be sure to read our introduction to the Vault Agent which is very helpful for fetching initial secrets and a number of other tasks.

HashiCorp Vault is an open source tool for managing secrets. Application identity management with Vault enables applications and machines to automatically create, change, and rotate secrets needed for communications, services, scripts, etc. Additionally, Vault enables administrators to manage applications and machines by providing access control over different secrets. In a previous post we looked at Why We Need Dynamic Secrets. This post explores how machines and applications can use the AppRole auth method to authenticate with Vault and access secrets.

Auth methods in Vault are the components that perform authentication and assigning policies to a user, application, or machine. Vault has many auth methods to support different use cases and sources of identity. Organizations using Active Directory to manage users can use the LDAP auth method, some might use Github auth method to manage users, while VMs running in AWS can use AWS auth method.

The AppRole auth method allows multiple “roles” to be defined corresponding to different applications, each with different levels of access. To authenticate with Vault the application is assigned a static Role ID and a dynamically generated Secret ID which are both required to login and fetch a Vault token. The AppRole auth method was specifically designed to be used by machines and applications but uses similar authentication method that a human might use. You can look at Role ID as a “username” and the Secret ID as a “password” allowing machines to authenticate to Vault. Once authenticated, they are assigned a set of policies which grant access to retrieve secrets from Vault.

As discussed earlier, Role ID can be seen as the “username” for a particular application. This means that multiple instances of the same application can share the same Role ID. For example, a front-end service can have multiple instances running and they all share the same Role ID since they are a single logical service. Role IDs can be created by an operator or a build system and is provided to the application using various methods like configuration management. This can then be used along with a Secret ID to login to Vault.

Secret ID is always intended to be a secret and can be seen as the “password” that is required to login to Vault. This can be dynamically generated by a trusted entity such as build system or using configuration management. Each Secret ID is meant to be unique for one instance of an application. Unique credentials allow us to better audit access and have fine grained revocation of access. Each Secret ID can have a usage limit, TTL, and expiration to better limit access. 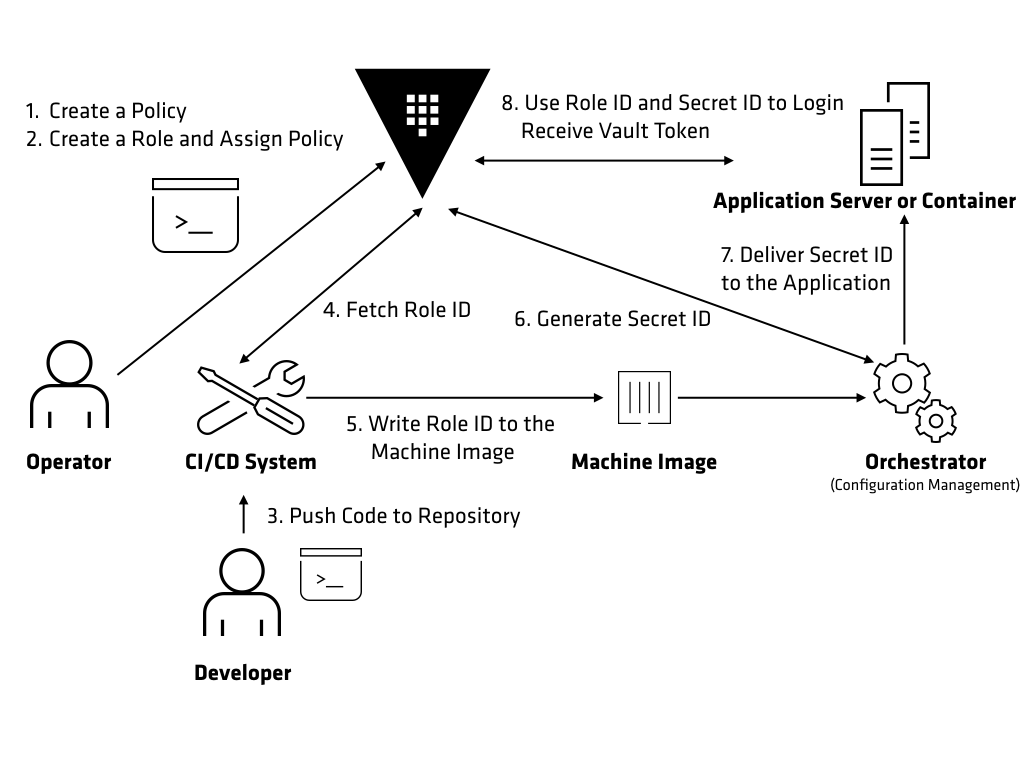 The above example explores an end to end process of generating a Vault token for an application running on a server or using a container.

In this example, an operator creates a policy to allow an application to fetch its secrets from Vault. Below is an example of a policy that is created for a front-end service named “hello-world”.

Next, an operator can create a role in Vault and associate the policy with that role.

Note that the orchestrator(Terraform) can only generate Secret IDs for the hello-world application and does not have access to the secrets for the application. This is essential helps to compartmentalize access in the application delivery pipeline.

The -field=token command line argument can be used to filter the output to only return the Vault token. This is helpful when setting the VAULT_TOKEN environment variable.

The AppRole auth method provides a workflow for application or machines to authenticate with Vault. It can help provide a multi-part authenticating solution by using the combination of Role ID (sensitive), and Secret ID (secret). AppRole allows applications to be assigned a unique role and securely authenticate with Vault while fitting into existing configuration management or CI/CD workflows. To learn more checkout AppRole auth method.

The HashiCorp Vault ecosystem continues to grow with the addition of 25 new integrations this past quarter.

How to Connect to Kubernetes Clusters Using Boundary

Here’s how to use HashiCorp Boundary to provide identity-based remote access and credential management for Kubernetes clusters.