Nomad 0.11 announced a Technical Preview of the HashiCorp Nomad Autoscaler. This is a new open source project that provides the ability to automatically scale workloads running on a Nomad cluster. It's capable of being easily deployed on Nomad, and it employs a plugin system that allows operators to perform autoscaling in whatever way is appropriate for their workloads.

The Nomad Autoscaler is being released as a technical preview in order to get early feedback from the community. As a result, some of this content is subject to change. However, we're excited about this capability, and we know that first-class autoscaling support is something that the community is excited about as well.

This blog contains an overview of the Nomad Autoscaler architecture, as well as the changes in Nomad 0.11 to support this and other autoscaler efforts. You can also check out the autoscaler preview video from Nomad Virtual Day or register here to watch a live technical demo.

Autoscaling refers to the automatic scaling of computational resources. Autoscaling is an important tool for many of our users. Applications and clusters must be given sufficient resources to meet business SLAs. However, resource utilization in excess of that need can result in unnecessary costs and/or scheduling contention. Complicating this balance is the reality that application and cluster loads can change dramatically over time, necessitating automatic adjustments capable of responding to real-time demands.

The Nomad Autoscaler has been implemented as an external process which interacts with a new Scaling Policy API in Nomad. We decided on this approach for a number of reasons. A separate binary decouples our release lifecycle, which is particularly helpful as we finalize the architecture of the autoscaler. Furthermore, this means that the scaling policy API introduced in Nomad 0.11 is available for third-party autoscalers to use as well.

This interaction is illustrated in the figure below. 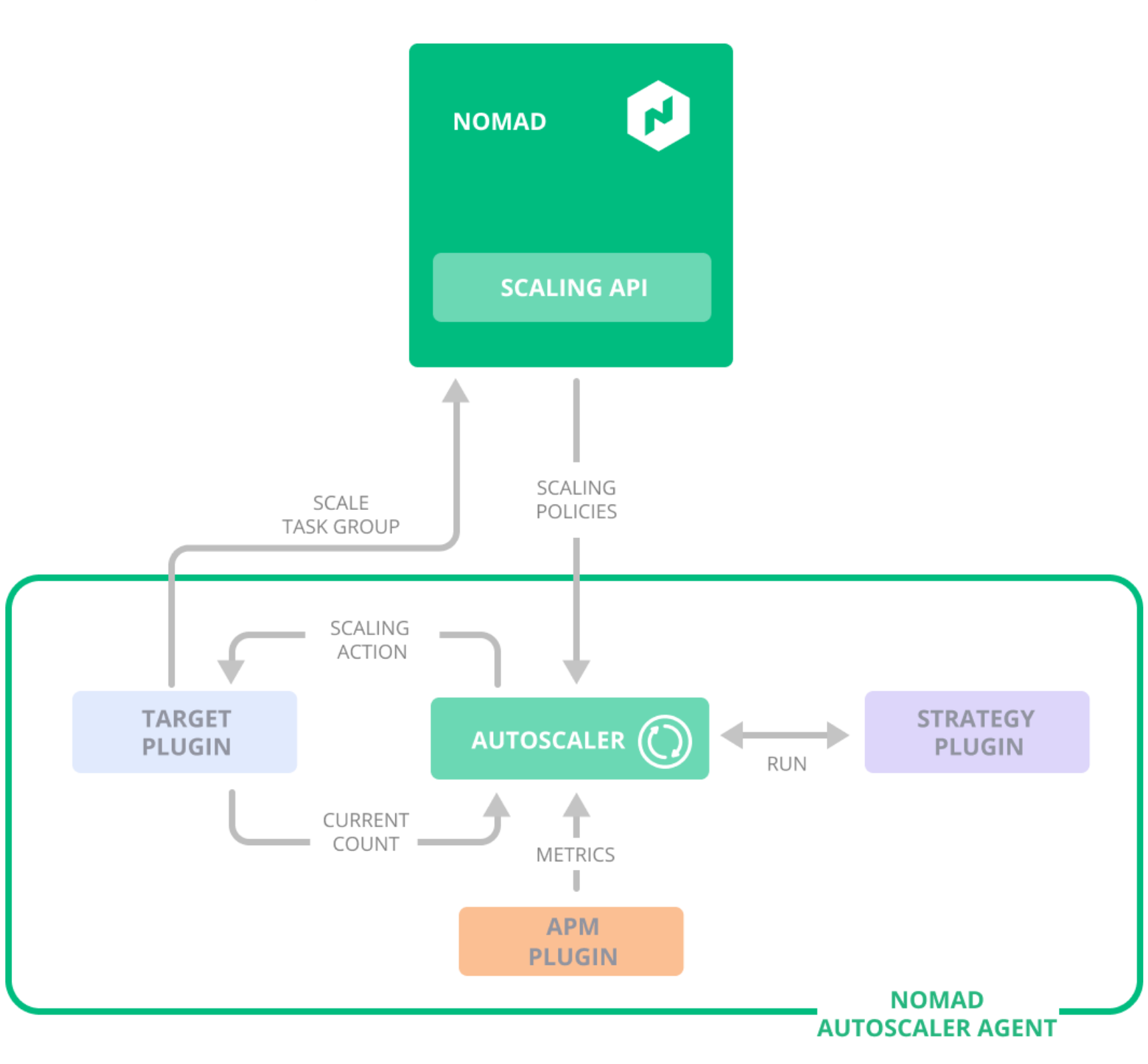 Illustration of the interaction between the Nomad Autoscaler, its plugins, and Nomad's APIs.

The architecture of the Nomad Autoscaler was designed to streamline the user experience for operators already familiar with Nomad:

The steps below illustrate the workflow for running and using the autoscaler.

The ability to run the autoscaler on Nomad means that all the capabilities of the Nomad runtime are available, including downloading autoscaler plugins using artifact blocks and using template blocks to configure the autoscaler.

»Step 2. Configure A Nomad Job With an Autoscaling Policy

Once the autoscaler is running and connected to Nomad, it will query for scaling policies. Scaling policies for a task group are provided as part of the new scaling block, like so:

This example policy refers to the "prometheus" source defined in the autoscaler configuration, as well as the "target-value" strategy plugin, specifying that the task group should be scaled so that the average number of connections to the service is 20.

The Nomad Autoscaler, along with source for plugins, is available on GitHub. This repo includes instructions for building and running the autoscaler, as well as example usage. We'll be working with the HashiCorp education team to provide guides for best-practice deployment of the autoscaler and for building plugins. In the meantime, feel free to try it out and give us feedback in the issue tracker. To see this feature in action, please register the upcoming live demo session here